Welcome to CSNpharm! For Research Use Only!

You are here : Home / PROTACs

PROTACs (Proteolysis-targeting chimeras) are small molecules consisting of three parts, a warhead (a targeting ligand for a protein to be degraded), an E3 ubiquitin ligase recruitment ligand and a chemical linker connecting the two ligands. PROTACs can mediate the heterodimerization of the two bound proteins, thus recruiting E3 ubiquitin ligases to target proteins for their ubiquitination and subsequent proteasome-mediated degradation. Different from the traditional small molecular inhibitors which can only modulate the activity of the target proteins, PROTACs can directly degrade the target protein through the cell’s own protein destruction machinery.

CSNpharm provides a range of PROTACs used for target protein degradation, as well as a series of degrader building blocks for you to develop new PROTACs. 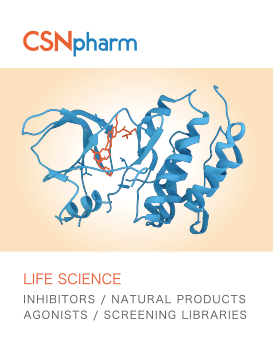 About Us
Site Map
Join With Us